… so, up and at em kind of early … Barney barked a couple of times in the night, he could hear any car pulling up outside, horn honking, people walking by, etc.  But, amazingly I didn’t feel over tired.  Thankfully b/c this was going to be the long day of driving to make Day 3 a short day!  One thing was for sure, I wasn’t loading up my stuff without loading up the little B! 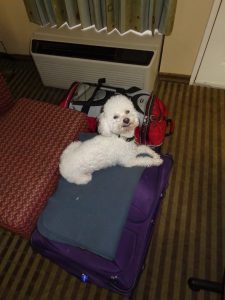 8:15 am ~ ALL the big trucks were gone and my exit out of that oversize parking lot was as easy as the hotel clerk made getting into it sound! I pulled out of the hotel and a gas station was close by. I was waiting to turn in and looking to see where the diesel pump was to ensure I wasn’t going to have to do any trailer tricks first thing. I must have paused just a second too long as a guy came out waving me in right to where I needed to go. Had somewhat of the same feeling I do walking into Home Depot or Lowe’s Single Girl through the doors and the idiot light goes off immediately. Got fueled up and headed on my way to Texarkana – 100 miles away.

9:00 am ~ called the Boss and told her I was fueled up and on the road.  Call the 4G to catch my Dad, no answer, so hung up and called my Mom’s cell phone.  She asked me about my night, if I was on the road yet, and what was going on.  Asked her how she was to which she replied “well, we’ve had a change in plans, I’m in Conroe” <inner thought process … I talked to her at almost 10pm Monday night and she was in Burnett, Texas with her sisters, several hours away from Conroe> “with Dad, he’s in the hospital”.  Ummmm … what?!!?!?  Exactly my fear.  I have a truck and trailer, am also several hours from home,  what do I do??   My Dad had driven himself to HMH where they confirmed a “heart event” and knew he needed a heart cath which they didn’t do.  So, away he went by ambulance to Conroe at 3am.  He called my Mom before he left HMH and told her where he was and she and my Aunts loaded up to hit the road home.  She was to the car he left at HMH and she was in Conroe by 8am.  I happened to call just a few minutes after they had seen the Dr and had an idea of what was to come.  They were just awaiting an opening in the schedule for the heart cath and best case would put in a stent, worst case … TBD.  Immediately sent out a series of texts to my friends and asked that they be praying …

… crossed into Arkansas and made a quick stop at the Welcome Center Rest Area.  My head was spinning, but overall I was amazingly calm.  Here’s a shot of command central in the truck … satellite radio, ipod, iphone, GPS, Dr Pepper, Tervis cup fill of water and of course my cowboy boots!  🙂 Don’t tell my Insurance Agent (aka my Dad) about these photos I took while driving 65/70 mph down the road. 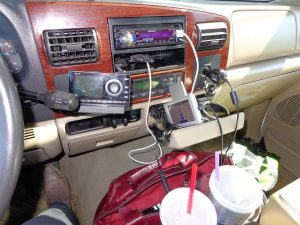 … Barney was pretty excited again today on the road, hard to stay awake in that sunshine 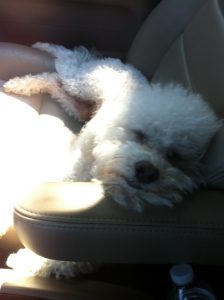 12:30 pm ~ was into Little Rock and to the East side, headed for Memphis.  Stopped again to fuel up and happened to hit a Pilot/Subway/Pizza Hut.  Instead of opting for the healthy 6″ sub I went for the cheese pizza!  Completely justified since I just had peanut butter crackers for dinner the night before.  Chatted with Mom again while stopped and walking B, Dad was scheduled for Heart Cath at 12, but he hadn’t been taken back yet.

1:00 pm ~ My Dad went in for his heart cath, and they determined a stent would be the solution  which was put in immediately and he was headed to recovery by 2ish. 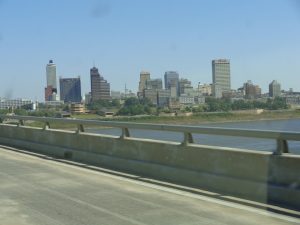 and immediately crossed the Tennessee State line on this bridge.  As I was crossing through Memphis “East Bound and Down” came up on the radio.  Turned it up and sang along! 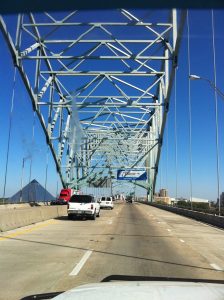 3:45 ~ B was getting in a good nap … I definitely could have used one about now too.  Or a massage.  My back was feeling the hours in the car/stress/nerves/tense of all the days events! 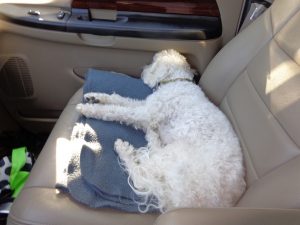 Tennessee was a beautiful afternoon drive.  You can’t really tell from my dashboard photos but the rolling hills were beautiful and the leaves are starting to change colors!  And the sky was blue like this all day!! 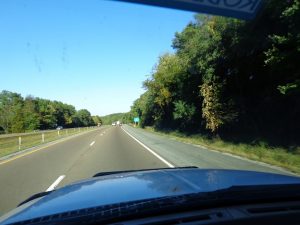 6:00 pm ~ crossed through Nashville and headed onto Bowling Green, Kentucky, my stop for night 2.  If you know me at all you know I usually run my car until the gas light comes on, but I was a little more careful on this trip not to do that.  However at 50 miles to Empty the low fuel light comes on!  I did stop just east of Nashville to fill up with fuel.  I must be getting fairly quick at navigating gas stations.  No one else has come out to wave, (guide?) me in. 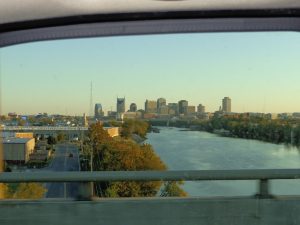 7:30 pm ~  found hotel, easy over sized parking, but no pets allowed and I’m on the 2nd floor of the hotel with interior doors, not exterior.  So, unloaded all my luggage, went out the side door and back in with Barney.  Shhh … I won’t bark if you don’t tell … 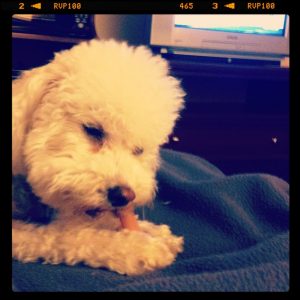