Pumpkins are on display, we have yet to see cooler temps in Texas and it’s time for 31 days of writing. 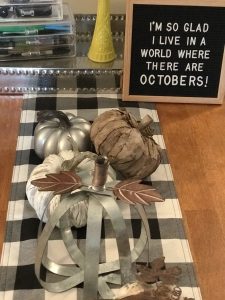 I REALLY considered skipping this year, even though I also said that last year. Then, I got the message this will be the last year for organized #Write31Days and I decided that was a good reason to go for it.  I also want to say THANK YOU to all of you who have asked me about writing lately. I’m sure some of what’s been going on lately will come out here in the days ahead, but I just haven’t gotten back to a rhythm of writing after finishing my MBA.

In case you’re new here, or wonder what I’ve written about in the past….

And, here we are in 2018, which I’m calling “Do it again”.
(Scroll to the bottom of this post for daily links)

One of my favorite songs on the radio is Do It Again by Elevation Worship. It has been out for a while, and there are a few lines that have hit me in particular seasons….

Great is Your faithfulness.

You’ve never failed me yet.

I know the night won’t last.

My heart will sing your praise again.

This is my confidence.

I believe I’ll see you do it again.

You made a way, where there was no way.

This year the opening lyrics have gained a new significance for me….

Walking around these walls I thought by now they’d fall

I have long had the book The Circle Maker in my “stack to read”; but for whatever reason I’ve put it off.  Finally, in September I picked it up and started reading.  My faith has been very important to me throughout my life, I do pray regularly for others and myself, but lately I’ve been learning more about my prayer life, importance of the discipline of prayer and this book is specifically about our prayer lives. I couldn’t believe I hadn’t read it sooner.  And, I wanted to start it over again as soon as I finished it.

(Disclaimer: no book, no matter how good it is, replaces reading of scripture and instruction given in the Bible. These books are good for perspective but should never be replacement for biblical truths.) 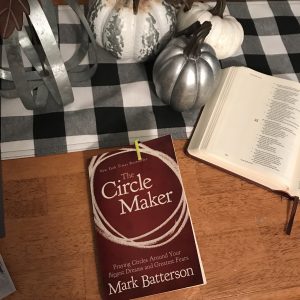 The book recounts the story of Jericho and the walls falling after walking 7 times around the city. The story is found in Joshua 6:1-27.  I’ve long known this story, learned a song about it as a kid and referenced it as a place where God did a miracle.

But, in my real everyday life?  Walking around these walls, I thought by now they’d fall.

There are some things I have long prayed for and believed them to be good and right and that God would honor. However, I haven’t received answers I thought I would.

Does that mean those walls in Jericho aren’t the same as walls in my life?

Even though actually seeing walls of Jericho fall is pretty much unfathomable to my mind.

Even still, I should keep circling. Thus, #doitagain.

So, this month I’m writing about all kinds of things that I, and maybe you, need to be reminded to do again. I’ve made a few notes, but I’m not exactly sure where this will end up on October 31, but I’ll write again tomorrow and see where it goes. The discipline of prayer is like discipline of so many other things in life, to see the walls fall.  It doesn’t matter if they fall in the way I thought they would. They will fall. If I’m faithful. Because God is faithful. And, he will do it again.  So, should I.

See you back here tomorrow! 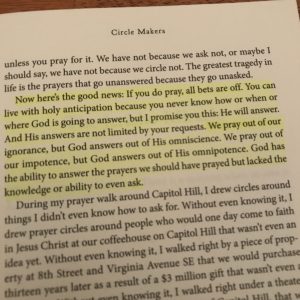